First, I must mention… the starlight sky the night we slept inside the Serengeti was the most beautiful thing I’ve ever seen. I felt like the entire Universe was within my reach and that I could pluck each star one at a time and put it in my pocket. Absolutely amazing. Pictures aren’t possible, but I’ll never forget it.

We left the Twiga Campsite and the next morning made way to the Serengeti. We stopped for a view of Lake Manyara on the way… vendor at overlook site smelled like a liquor cabinet at 10am😂🙆🏼

Then we drove through Ngorongoro Conservation Area to get to Serengeti… 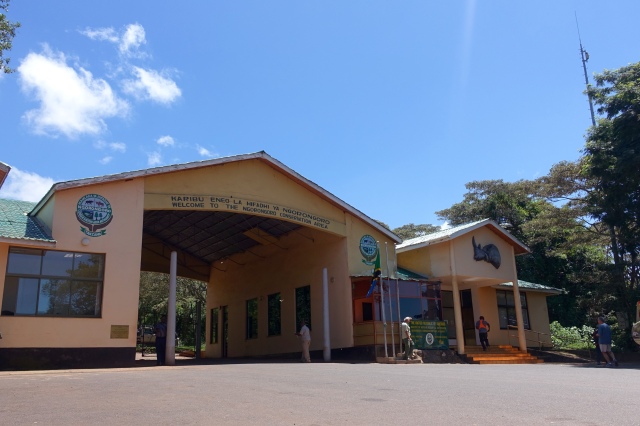 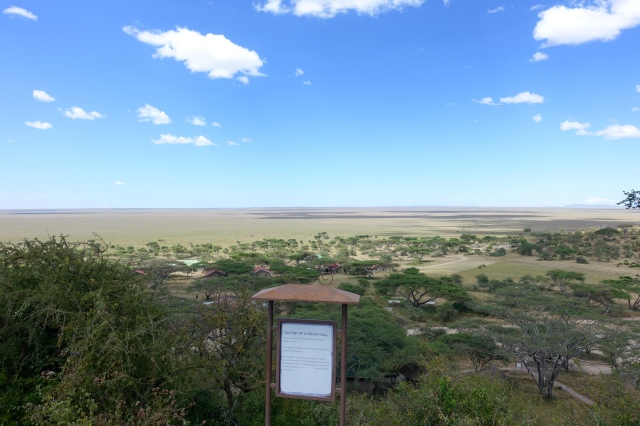 We got to see a lot of the classic acacia trees… they are stunning against the backdrop of the plain.

umbrella thorn acacia tree😍 (do you see the leopard?) 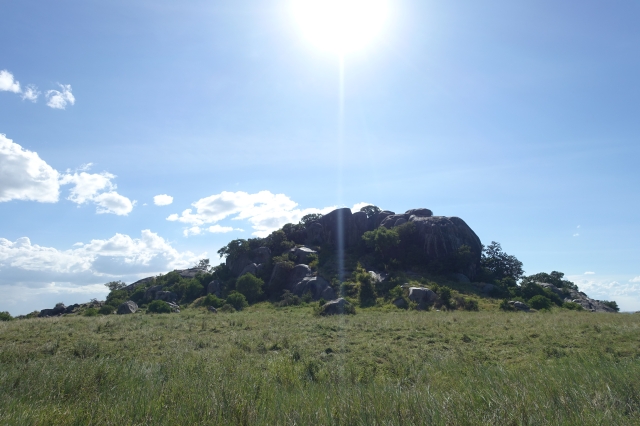 I must re-watch The Lion King movie. I didn’t realize it was shaped by the Serengeti and Swahili. Really cool. Rafiki? Swahili word for ‘friend’… Campsite named Simba, Pumba… ‘hakuna matata’, which people really do say all the time here; I noticed most in Zanzibar… lions, hornbills, widebeests, baboons, warthogs, hyenas… and the Elephant Graveyard, which we saw! 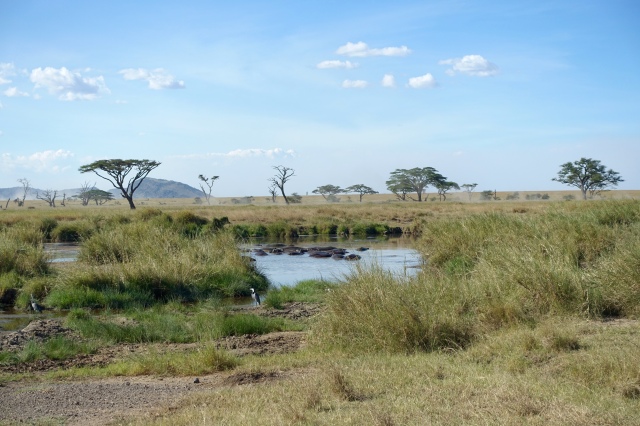 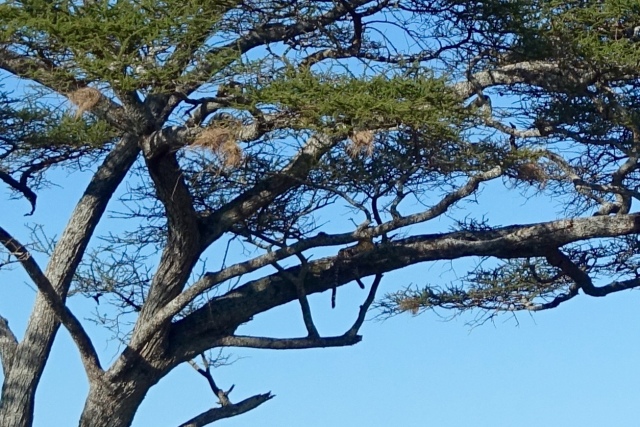 can you spot the leopard

bird friends on back. pose, gurrrrlll!

The terrain of the Serengeti is so different to the Tarangire or Ngorongoro – they are all three so unique. And they are bordering eachother, one after the other. Such a sight to see.

That night, we camped at the Nyani Campsite, in the center of the Serengeti… uNFENCED! Maybe Marko didn’t like me, but he told me to set up my tent on the edge of the campsite:/

treehouse camping! someone has the right idea!

I was sitting on a stool, in the dark, listening to music, alone, by my tent, and I thought, “Hmmm, I better shine a light to make sure that no critters are around me. So, I turned on my iPhone flashlight on and shined to the edge of the wilderness, and there, behind a bush, was a set of glowing eyes reflecting back at me! I thought, “Ughhh, it is looking right at me. But maybe it’s just reflectors that they set up at the edge of the campsite for markers or something.” So I kept watching, to see if it moved, and it did… It turned it’s head… Then looked back at me… Then, I decided to stand up because I was really scared… And it stood up and walked towards the toilets building on the other side of the camp. Sooooo scared. It was very stealthily walking. Marko told me the next day it was probably a hyena because the lions don’t bother with the campsites… but, I mean, it could’ve been a lion stalking me in the bushes. It looked too smooth and stealthy when it walked to be a hyena. Scary, exhilirating, no fence camping in the Serengeti. Unforgettable!

That night, I was Jared’s (our cook) sous chef😃 It was so fun. He was amazingly resourceful, making the great food that he did with such limited equipment and supplies. Really amazing. I chopped the veggies and set the table. He didn’t know hardly any english, and I don’t know any Swahili, so there was a lot of pointing and figuring it out, but it worked! And it was so fun.

This is the kitchen in a day shot, with all the cooks from the other safaris:

And, below, working in the kitchen that night. The campsite didn’t have any electricity, except for a few lights inside the kitchen and the bathrooms that are powered by small solar panels, that’s why it was soo dark. 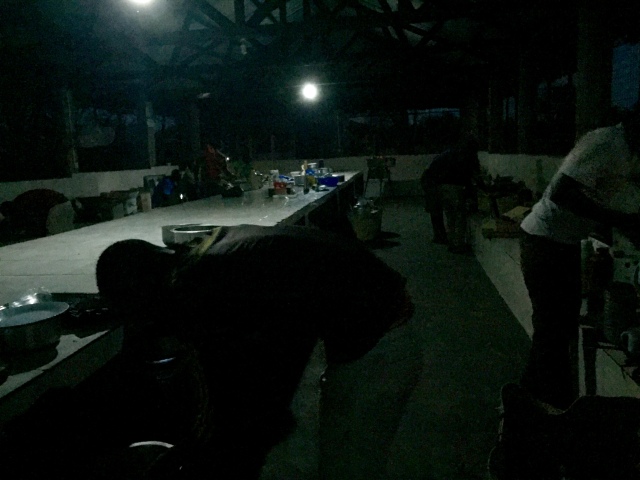 The next morning, we woke up early so that we could see the sunrise over the Serengeti plain. Marko took us to a nice point with acacia trees in the distance on the horizon. Beautiful.

beautiful sunrise over the Serengeti 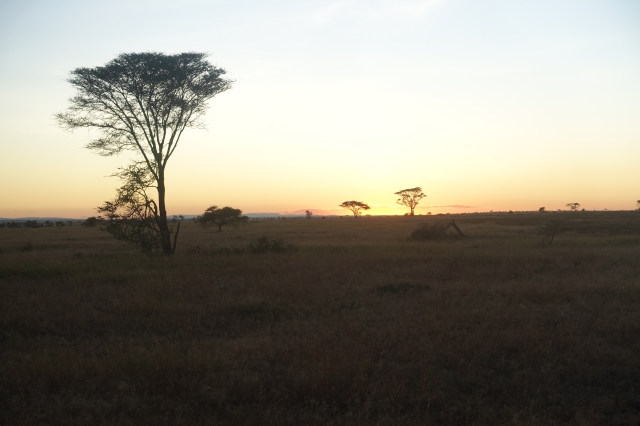 a new day dawns over serengeti❤️

That morning, all morning, we did a game drive in the park. Saw lots of good stuff! 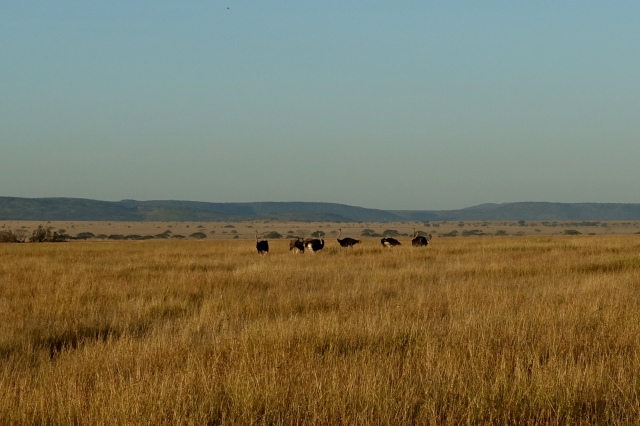 view of road from picnic area 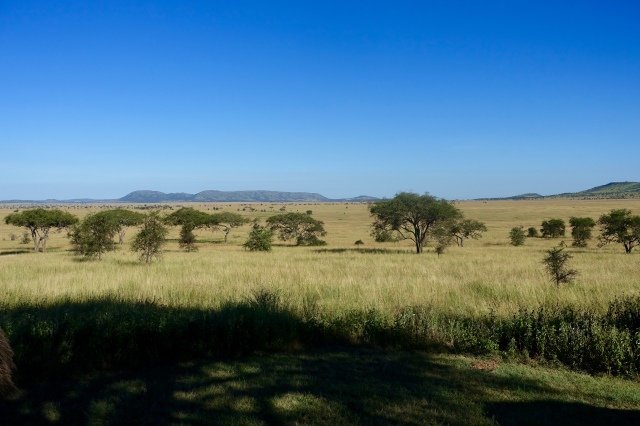 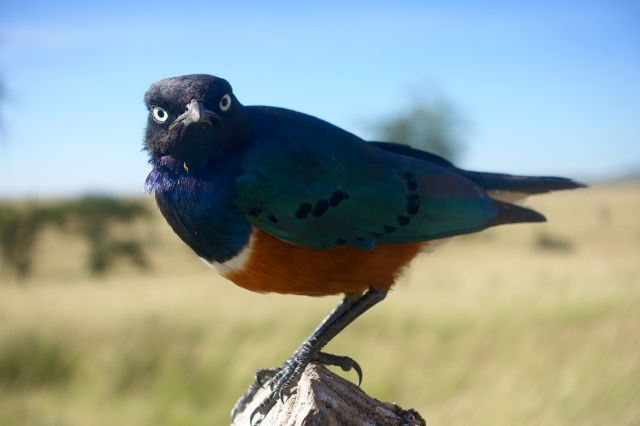 These starlings are everywhere in arnd around the park. But they’re so metallic-y colorful, seems like they should be more rare! This one was not shy, like a lot of the wildlife in the park. I was centimeters away from it with my camera, and it just watched☺️ 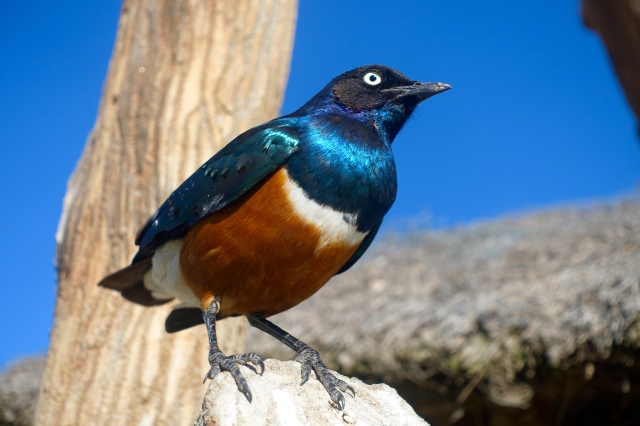 We found leopard number 2 – a quick sighting because he was climbing out of the acacia tree and went into the tall grass…. 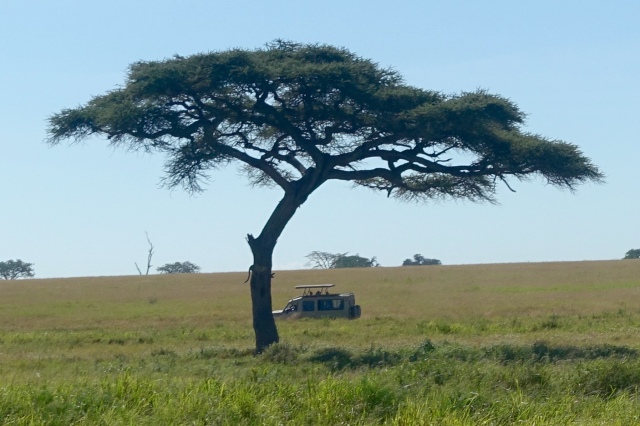 can you spot the leopard?

And I had ANOTHER aggressive monkey attack! This time, he got into a boxing match with Marko. So unassuming initially… but I knew he was up to no good… 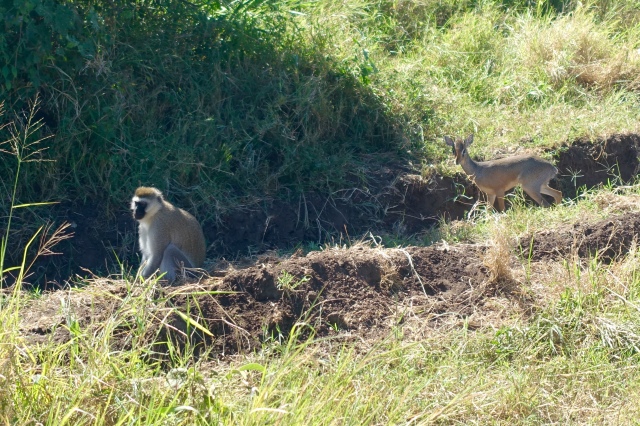 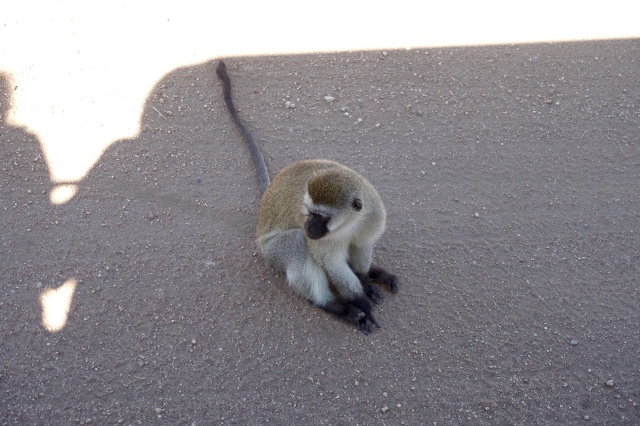 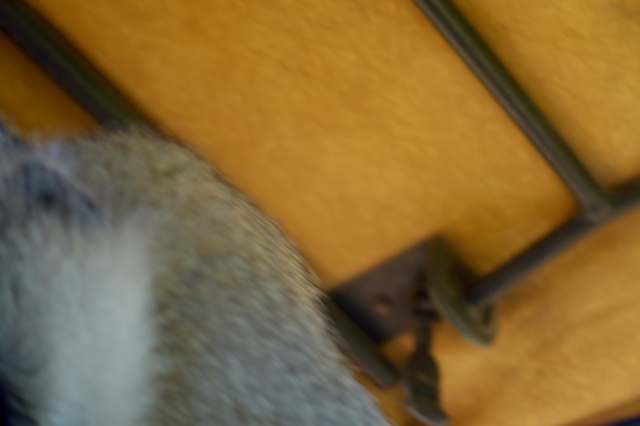 away with his prize, on top of car 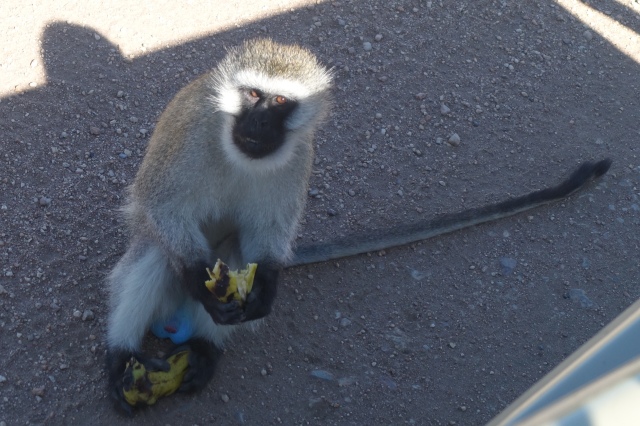 revelling in the loot

He found two bananas stuffed down into a crevice inside the truck, and I didn’t even know they were there. He went straight to them! And then fought Marko (as he was on the cell phone and everyone else was freaking out), snatched the two bananas, and ran. Fat hog.

They were pretty far away, but there were two laying in the grass under one tree, one was up in the tree and climbed down, and a fourth one under a second tree nearby. 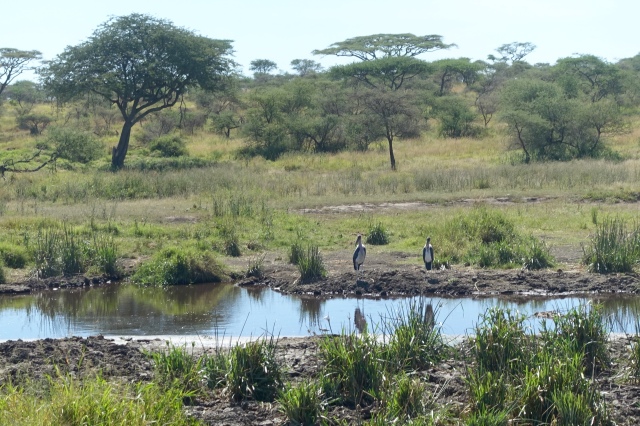 As we were leaving the park, we had a second, incredible lion sighting😍 Four them piled up on some rocks, just a few feet away… 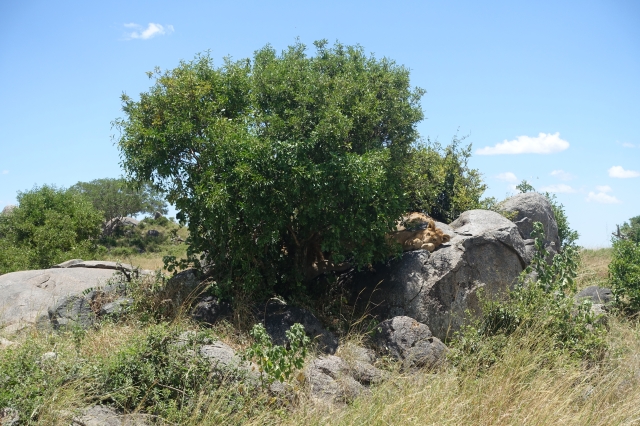 sleeping but peaking at us 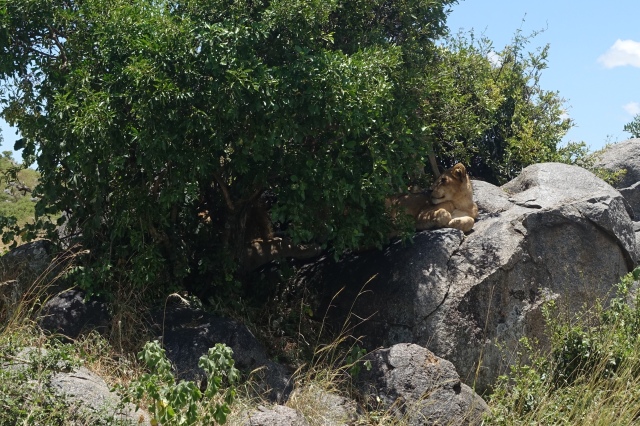 he looks so friendly from here

This lone elephant was up on a hill, climbing on the rocks, to try and reach these leaves. He looked so out of place😆 He needs to go back to elephant school to learn how to be an elephant again😂

That was all for the Serengeti😢 At the end of the day, with the lion sightings, we had seen 3 of 5 Big Five, with Cape Buffalo and Rhinocerus still left. Sad to leave the Serengeti, but it was amazing!

After this, we made our way to the Ngorongoro Crater for the last night and day of safari😃

Next up:  Ngorongoro Game Drive + Tree of Life

3 Comments on “The Big Five :: SERENGETI”