It sounds like the name of a criminal, doesn’t it? Vladimir… very common Slavic name, but is also really often the name of a mob boss in movies (and the name of the ultimate Russian mafia boss / crook) + Šuster – pronounced “SHOO-ster”… sounds and looks a lot like “shyster“. 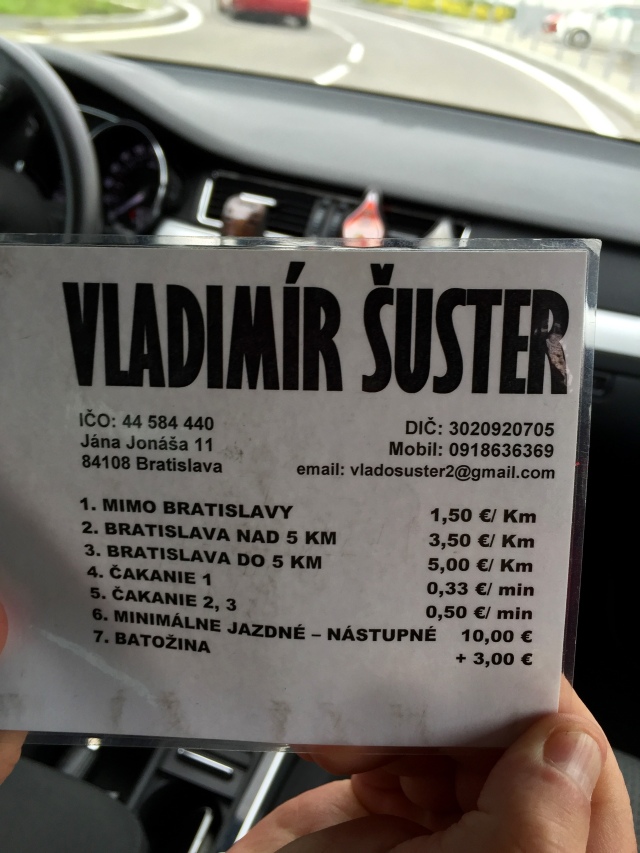 After I was in Hungary, I took a bus from Budapest to Bratislava, Slovakia, and when I got to the bus station, I needed to get a taxi from the bus station to the airport to pick-up a rental car. There was a line of taxis queued up waiting, and I walked over to the first one and got in. No sanctioned taxis, but that’s been the way I’ve traveled for the majority of my trip. I guess I drew the short straw because the cab that I got into was operated by Vladimir Šuster.

The drive took 10 minutes, and when we got to the airport, I looked at the meter, and it had 46 on it. I was confused because I thought that Slovakia used the Euro, but there was no way that the trip should cost 46 Euros. Vladimir affirmed that he was, indeed, trying to charge me 46 Euros for a 10 minute cab ride. An argument insued. I told him there was no way I was paying that, he asked how much I would pay, I said 5 Euros, and he was yelling and angry. Then he said, “No less than 30 Euros!” That’s still $34 for a 10 minute taxi ride! No way. He didn’t know much english, which I guess was good because I was calling him every name in the book. I tried to get out to go into the terminal and get help from someone who worked in the airport, but he wouldn’t unlock the door. So then I got a little scared, and he said, “I go to police!”, and he gunned it and started driving out of of the airport! I was really scared at this point because I knew that he could drive me anywhere he wanted and really rob me. I yelled at him to stop and let me out, tossed 30 Euros on the seat, got out of the car, typed his license plate # into my phone before he sped off, and started walking back to the terminal.

JERK! Not a great introduction to Slovakia😧 Sooo, I went inside the airport to the information desk and reported him – his name, info, and his license plate #. The ladies working there were really nice and apologetic, even. As we were talking about it, one of them googled his name, and THERE WAS ACTUALLY A NEWS ARTICLE WITH A PICTURE OF HIM TELLING PEOPLE TO LOOK OUT FOR HIM BECAUSE HE IS RIPPING PEOPLE OFF!

For anyone traveling to Bratislava, Slovakia in the near future, if you get into a taxi with Vladimir Šhuster, find a different cab immediately! My first blatant rip-off thus far on my trip, so I’m lucky for that😄

The rest of Slovakia, thankfully, was a great Slovak Surprise😍 National Parks, trees, mountains, rivers, pine trees, seclusion… It reminded me of West Virginia and Kentucky a little😍

I stayed in a cabin in the woods, on the side of the mountain near a town called Zazriva. It’s outside of the Low Tatras National Park. I was surprised at how beautiful the countryside in Slovakia is. The house had heat via the fireplace, so I had a great time getting firewood from the shed and bringing it into the house and controlling the fire. LOVED IT. Serious flashbacks of growing up in Kentucky with a wood stove for heat and having to get firewood from the barn (which I hated at the time)☺️. I remember trying to get as much wood as possible into the wheelbarrow in one trip so I wouldn’t have to make more than one trip, and then tipping the wheelbarrow because it was too heavy, and having to pick it all up😂 Haa, those were the days…

This place was so prettyyyy 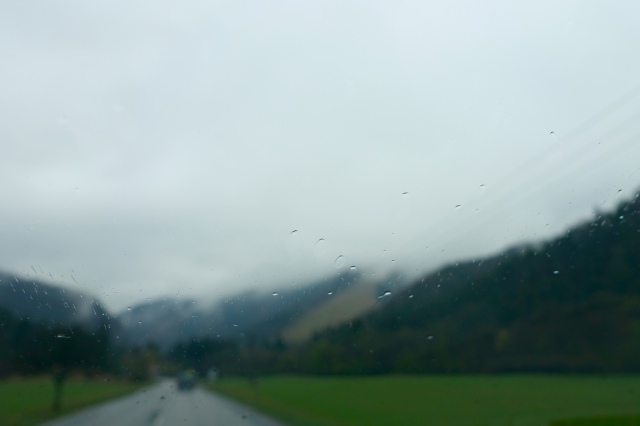 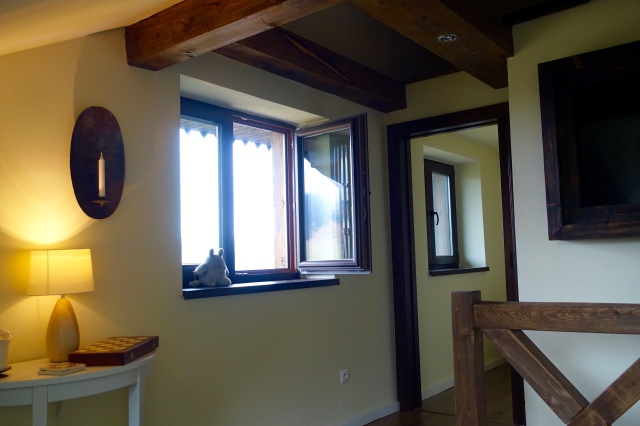 I visited one town that was a 30 minute drive from the cabin – Dolny Kubin. It was Sunday and rainy, so I guess that’s why EVERYTHING was closed..?😂

I loved it here. I walked on the trails by the cabin, enjoyed the scenery, cooked a little, and really didn’t do much else. It was great.

what is the bottom one 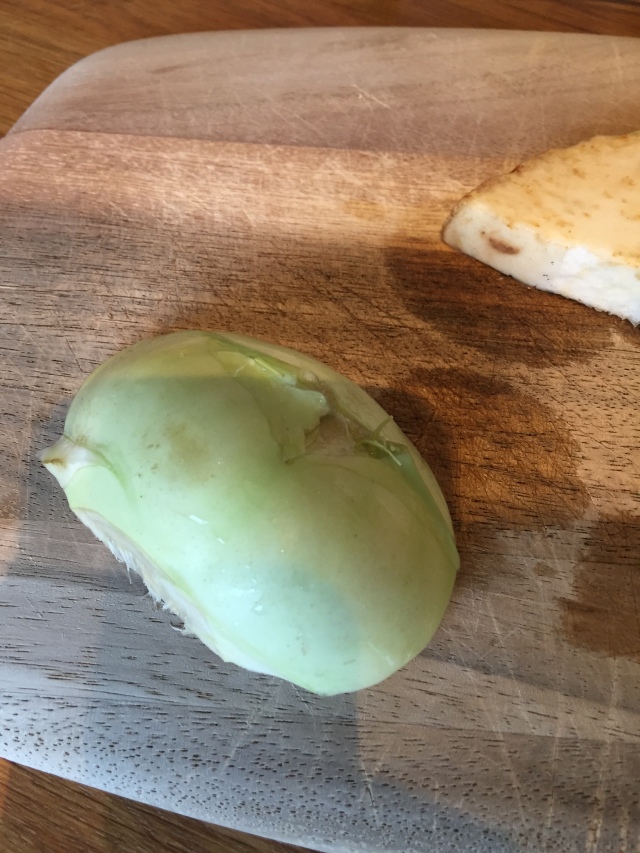 couldn’t figure it out 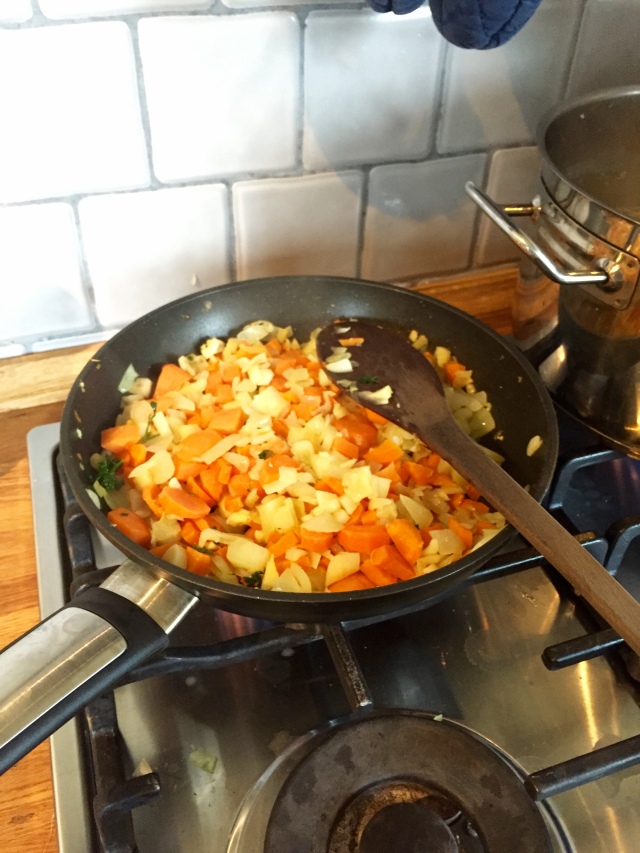 After some time of visiting cities, this was a great respite from crowds and noise! I drove to Poprad to drop off the rental car at the airport (creepy, empty airport), where no one was working at the rental car place, and no one was answering the phone! I ended up getting a lady who worked at the airport office to call THE FATHER OF THE DUDE WHO WORKED FOR EUROPCAR…? Because the dude who actually works there wasn’t answering his phone! And the dad was awesome!!😂 He came to the airport, took the car keys and GPS from me, and then dropped me off where I needed to catch my bus to Krakow!!! I didn’t ask him to do any of this. He was awesome. He was a retired Tourist Guide, and he said now (other than helping out his son, who he said he was going to have a talk with😂), he hang glides five days a week. He said, “I’m retired, but I have to do something!”  I was very grateful that he helped me when he didn’t have to.

The bus to Krakow was a mini-van, and it took around two hours to get there. I arrived in the evening, and the next day was my only day in Poland, and I was to visit Auschwitz.

Next up: a little bit of Poland